Back to LGBT Manifesto Home

The passing of equality & same-sex marriage legislation in England, Wales & Scotland were hugely significant turning points in LGBT equality, both in terms of rights, and of the increased visibility of LGBT people. However, there is still a long way to go in ensuring full equality for LGBT people in the UK, particularly in relation to less visible groups such as: bisexual, trans and non-binary people; BME LGBT people; older LGBT people; LGBT youth; LGBT immigrants and asylum seekers; and LGBT people who are mentally or physically disabled.

The LGBT Chief Executives Network, facilitated by LGBT Consortium, produced a national LGBT manifesto and a separate trans manifesto was produced by a developing alliance of Trans organisations (www.outbristol.co.uk/lgbtmanifesto). We are using this trailblazing work as the basis for the LGBT Manifesto for the West of England.

The population of the West of England dual city region (Bristol, South Gloucestershire, North Somerset & Bath & North East Somerset) has grown faster than the UK average to 1.1 million people over the last ten years. It’s generally a prosperous area with an excellent quality of life, a growing national and international profile with unrivalled business strengths, it is at the forefront of academic research, and has a well-qualified workforce and a vibrant social scene. Stonewall and Whitehall agree with the suggested figures of 6% of the population being Lesbian, Gay or Bisexual (LGB) which results in 60,000 residents in the West of England being LGB.

With these figures in mind, the development of a national LGBT manifesto and local manifestos for race & women, the development for an LGBT Manifesto was the next local strategic step to turn equal rights policy into practice.

Why is an LGBT Manifesto needed.

Bristol and the rest of the West of England has over 60,000 LGBT residents, part of the 3.7 million LGB people national (Stonewall). LGB people contribute 70-81 Billion to the UK economy (Stonewall).

So why do LGBT people need a West of England LGBT Manifesto?

Equal rights are just the first step to equality, COME HAVE YOUR SAY and help put policy into practice.

The Initiative is being hosted by Bristol City Council and the main public Visioning day was held on 23th February 2016 as part of LGBT History Month.  The next stage was the transition of the LGBT Manifesto planning group into a Steering Group and the questions from the event this event if you are interested in getting involved at the pre planning stages of the LGBT Manifesto click on the contact button.

To see the work on the National LGBT and Trans Manifesto’s please click on the Icons below these open in a new window and take you to the LGBT Consortium’s website. 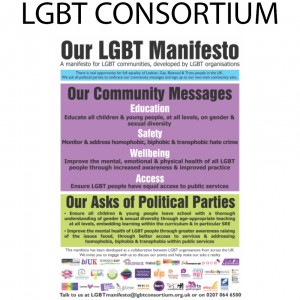